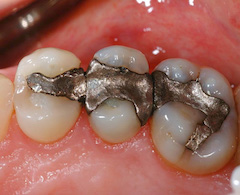 Silver amalgam has been the filling of choice for the past 150 years because of its ease of placement, its durability in the harsh oral environment, and its low cost. Today, about 73% of dentists in North America are still using silver amalgam as a dental restorative material.1

Amalgam fillings last between 5.5 to 11.5 years at which time they need to be replaced because of leakage around the edges, excessive corrosion, and underlying decay.2

An amalgam is defined as a mixture. In the case of dental fillings, an amalgam is a mixture of mercury with other metals. Each filling contains up to 50% mercury with silver making up 30% of the mixture and the remaining 20% consisting of copper, tin and zinc. It is inaccurate to call these fillings “silver fillings” because it is not the material in the greatest concentration. These fillings should more properly be called “mercury fillings”. Most people are not aware that all those blackish, silver colored fillings in their mouths each contain up to 50% mercury, a poison more toxic than lead or arsenic.

The average amalgam filling contains close to one gram of mercury. To put this into perspective, that is enough mercury to contaminate a 5 acre lake and declare it unsuitable for drinking and fishing according to the Environmental Protection Agency. It also is as much as is typical found in a mercury thermometer, which is considered a biohazard if broken.

Discover Magazine wrote an interesting article on the topic of mercury exposure in our environment and from our fillings entitled “Our Preferred Poison”.